A Story From a Freelance Attorney

Prior to attending law school, I had been working for a number of members of the California State Legislature.  However, I wanted to advance my credentials, so I attended law school in the evening while working full-time for the legislature.  At one point, I stopped work to extern for a federal district court judge, and at the end of my externship the judge and I sat down and talked about my future options.  During the meeting with the judge, I recall her laying out some options for my future, but what stuck with me was when she said, “You could be your own rainmaker.”

I returned to work as Legislative Director for a new member of the Senate, but after completing my last semester of law school, I found myself in a bit of a conundrum as it was clear to me that I could not fulfill my duties as a top staffer for the member while also studying for the California State Bar.  I put the bar off for a year to complete the legislative session, and then decided that I would leave my work to devote my time to studying for the exam.  After taking the bar, I wasn’t sure what I should do, as I did not want to immediately go back to work for the legislature only to find out that I passed and leave a job to begin practicing.  That is when my sister, who had been living in Central America for several years, said to me, “why don’t you come down to Guatemala and do something different while you await your results?”  So, I packed up my things, and my black Labrador of 11 years and I headed to Guatemala.

After settling in, I earnestly began to search for work as a freelance “law clerk,” as I could not have my own clients at that time.  I subscribed to Westlaw, and then spent many an hour googling “how to be a freelance attorney,” and things of that nature.  I reached out to my network back home.  With a stroke of luck, the website LAWCLERK.legal launched just as I moved abroad, and on the website attorneys from all over the United States could post projects that I could apply for and work on under their supervision.  I created a profile on the website, provided my law school transcripts, posted my resume and writing sample, and began earnestly applying for projects that I felt confident I was competent to undertake.  After my initial success, I began to develop relationships with several attorneys where I knew that I would be chosen for the projects that they posted.  However, there are many highly qualified and talented Lawclerks on the website, and it is very competitive.  I feel lucky that I was able to get in at the beginning when LAWCLERK.legal initially launched so that I could build my profile and increase my rating on the site to be as competitive as a Lawclerk as I could be when applying for projects.

I had originally thought I would stay in Guatemala until I received my results from the bar and then return to California to begin my career as a practicing attorney.  However, despite passing the bar, I began to realize that I could continue the work that I was doing while meeting my financial obligations.  Living project by project as a freelancer can be difficult, but the freedom it provides has been worth it.  After ten years of putting on a suit and scrambling every day to meet with this lobbyist, or that staffer, or members of the public, it has been a blessing to set my own schedule (except for deadlines), and work when and where I want. I can tell you, there is nothing better than drafting a research memo or demand letter while sitting on a terrace looking at three volcanoes (one of which is active and constantly erupting).

Freelancing has afforded me a life that many would envy, but it has its ups and downs.  Then, when COVID-19 hit, things began to change, to a degree.  While I initially saw a drop in the number of project opportunities, I have actually had relatively steady work.  As the stay-at-home order has been in effect, I imagine that more and more attorneys are reaching out for assistance from freelancers.  Prior to COVID-19, I feel the legal profession has been reticent to “farm-out” work, but as the work model has changed, using freelancers has become a viable, and economic, option.

The website LAWCLERK.legal has provided me the greatest opportunity to not only work for attorneys in my home state of California, but all over the country. My life as a freelance attorney has afforded me opportunities that many could only dream of.  It just took a leap of faith and some steadfast determination to make it work.  If I can be my own freelance “rainmaker,” then so can you! 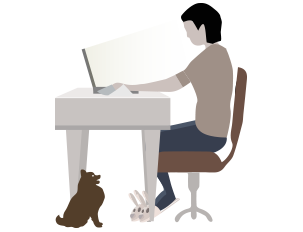 My Life as a Remote, Freelance Lawyer and a Military Spouse

I have a lot of titles in my life. Attorney. Wife. Mom. Sister. Daughter. Yogini. Derby Girl (Yes, it’s true!).